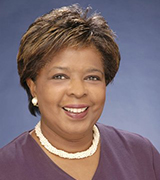 Judge Sandra Simms was appointed to the First Circuit Court, Twelfth Division in May 1994. Prior to her appointment to the Circuit Court, she served on the District Court from November 1991. She retired from the bench June 1, 2004.

Judge Simms was born in Chicago, Illinois. She is a graduate of Hyde Park High School, and obtained a B.A. from the University of Illinois, Chicago with a major in Sociology and Political Science. She earned her Juris Doctor degree from DePaul University, College of Law in 1978. After graduating from the University of Illinois, she was employed as a flight attendant for United Airlines from 1972-1977. She and her husband Hank, moved to Hawai`i in 1979 upon his transfer with United Airlines.

Her book Tales from the Bench: Essays on Life and Justice is a pioneer memoir about a neglected slice of Hawai`i judicial history. In this unique, insightful, and compelling book, written by the first African American woman judge in the Hawaiian Islands, Simms candidly reveals the cultural and political events and forces on the Mainland, and the diversity, crime, and social problems in the Islands that shaped her courage and commitment to justice. 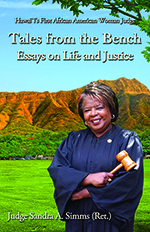 Daphne Barbee-Wooten is an attorney in Hawai`i. She served as President of African American Lawyers Association in 2003. She has practiced law for over 30 years and is active in law, politics, writing, and dance.

She co-edited and was a contributing writer for “Our Rights, Our Lives” (Hawai`i Women Lawyers Handbook, 3rd ed., December 1996). Her essay “Visiting Nanny Town” appears in A GO Girl! The Black Woman’s Guide to Travel and Adventure (The Eight Mountain Press, 1997). She contributed chapters to They Followed the Tradewinds: African Americans in Hawai`i (University of Hawai`i Press, 2004, rev. ed. 2014). She also is a regular contributing writer to Mahogany and Afro-Hawai`i News, monthly periodicals which emphasize events within the African American community in Hawai`i.

Her book African American Attorneys in Hawai`i  describes the lively, colorful history of African American attorneys with ties to the islands, from Justice Thurgood Marshall to President Barack Obama. Barbee-Wooten tells the little known stories of some of those attorneys who broke barriers and made their impact on Hawaii’s legal landscape, leaving the door open for many more to be told.

Ayin M. Adams, a native New Yorker, began writing poetry at age five and selling them on her street corner in Brooklyn for 25 cents. With much success, she quickly increased her sales to 50 cents as passersby enjoyed her work.

Winner of the Pat Parker Memorial Poetry Prize, the Audre Lorde Memorial Prose Prize, Nominated as Poet of the Year, Winner of the President’s Award For Literary Excellence, Grant Winner of the Zora Neale Hurston/Richard Wright Award, Winner of Sparrow Grass Publishing, Published in anthology Defjampoetry “Bum Rush The Page” 2004 top ten finalist in the Rap-It-Up BASS film competition sponsored by BET.com and Blackaids.org Foundation. 2008 Teacher of The Year Winner by the International Peace Poem. Ayin Adams holds a Ph.D. in Human Services and a Ph.D. in Metaphysics

African Americans in Hawai`i: A Search for Identity explores some of the dilemmas of identity and conflict in a place where Blacks are only 3.5% of the population. Unfortunately, the local media and education system have ignored, controlled, and/or marginalized blacks in local history. Thus images and perceptions of blacks in Hawai`i have been controlled or omitted, intentionally or by default or ignorance, thereby preserving the dominant American status, culture, and control of power and assimilation. Historically, identity and status in America, Hawai`i, and the world have been based on the privilege of skin color for too long.

Karla Brundage is a Bay Area based poet, activist, and educator with a passion for social justice. Born in Berkeley, California, Karla spent most of her childhood in Hawaii where she developed a deep love of nature. She is the founder of West Oakland to West Africa Poetry Exchange (WO2WA), which has facilitated cross-cultural exchange between Oakland and West African poets. Karla is a board member of the Before Columbus Foundation, which provides recognition and a wider audience for the wealth of cultural and ethnic diversity that constitutes American writing. Her editorial experience includes a pan-Africanist WO2WA poetry collection, Our Spirits Carry Our Voices, published by Pacific Raven Press in 2020–and Oakland Out Loud (2007) and Words Upon the Waters (2006) by Jukebox Press. Her poetry book, Swallowing Watermelons, was published by Ishmael Reed Publishing Company in 2006. Her poetry, short stories and essays have been widely anthologized and can be found in Hip Mama, Literary Kitchen, Lotus Press, Bamboo Ridge Press, Vibe, and Konch Literary Magazine. She holds an MA in Education from San Francisco State University and an MFA from Mills College.

Kathryn Waddell Takara, PhD, is the recipient of the 2016 Lifetime Achievement Award by the Honolulu NAACP as an “Agent of Change.” She is also the 2010 award-winning poet of the Before Columbus Foundation for her book  Pacific Raven: Hawai’i Poems. Since retiring from her position as professor at the University of Hawai`i at Mànoa–where she taught Interdisciplinary Studies and Ethnic Studies courses in African American and African politics, history, literature, and culture–she has continued pursuing her career as an author and publisher.

Born and raised in Tuskegee, Alabama, she is a celebrated performance poet whose Southern heritage and longtime residence in Hawai`i, as well as her travels in Africa, Europe, Central America, Tahiti, and China, are reflected in her poetry. She is dynamic public speaker who has been featured on TV and radio shows, interviews, and documentaries. She enjoys her family and friends, pets, doing meditation, and gardening, especially raising orchids. Writing is her passion and métier.

·       Frank Marshall Davis: The Fire and the Phoenix (A Critical Biography)

·       Tourmalines: Beyond the Ebony Portal